This page describes examples of archTk use cases. Each case is composed by different sections: Problem background, the network model and results.

More than half a million people live in Europe on chronic renal replacement therapy by hemodialysis (HD). This number increases annually at a constant rate of 8%. The Achilles heel of HD is the vascular access (VA) used to connect patient circulation to the artificial kidney. The current recommendation for VA is the native arteriovenous fistula (AVF), surgically created in the forearm. VA dysfunction is the major cause of morbidity and hospitalisation in HD patients, and the major limitation of HD treatment. Short- and long-term AVF dysfunction includes non-maturation (inadequate increase in blood flow after surgery), stenosis due to intimal hyperplasia, and ultimately thrombotic occlusion. Steal syndrome and cardiac failure are also common complications of AVF creation. Prediction and prevention of VA dysfunction are still open clinical challenges with more than 90,000 procedures/year in Europe for revision or reoperation. Despite the magnitude of the clinical problem, there has been a paucity of novel therapeutic interventions in this field due to complex mechanisms responsible for AVF complications, which are closely related to both the sudden and sustained hemodynamic changes involved in AVF creation.

The EC FP7/2007-2013: ARCH, Project n. 224390. will develop image-based patient-specific computational modelling tools to simulate hemodynamic changes induced by AVF surgery and long-term vascular and cardiac adaptation. The modelling tools will be designed and experimentally validated to predict AVF function for improvement of surgical planning and AVF management, and will be provided to clinical end users by a distributed IT infrastructure. Verification of model prediction of AVF maturation, patency, onset of steal syndrome and cardiac overload will be performed on the basis of prospective observational studies in HD patients. The basic tools and data produced in the context of the project will be made available under open-source licenses and shared in the context of the VPH initiative.

Depending on the arm in which the vascular access is created, the left or the right arm is modeled in detail. The aorta, the vessels in the lower body, in the contralateral arm and in the head are only modeled partially and closed by end-segments. After AVF surgery, an element that model the anastomosis and a venous branch are added to model the venous return of the AVF. For an upper arm a single vein is added (basilic or cephalic vein), whereas for a lower arm AVF the distal cephalic vein, the median cubital vein and the proximal basilic vein are added. Each generic model can be made patient-specific. 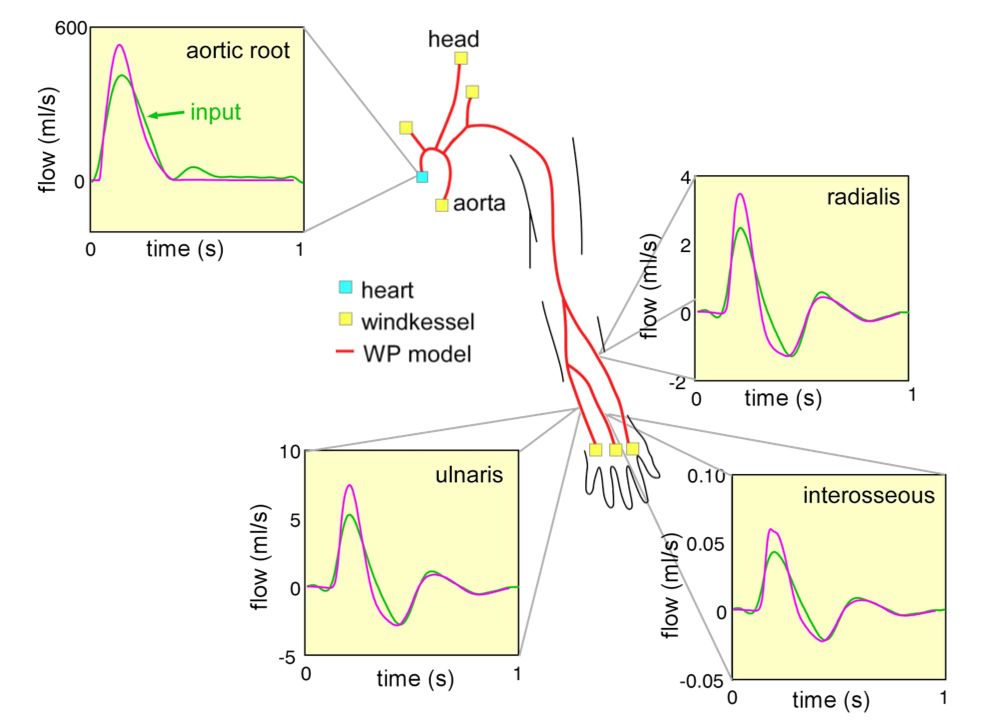 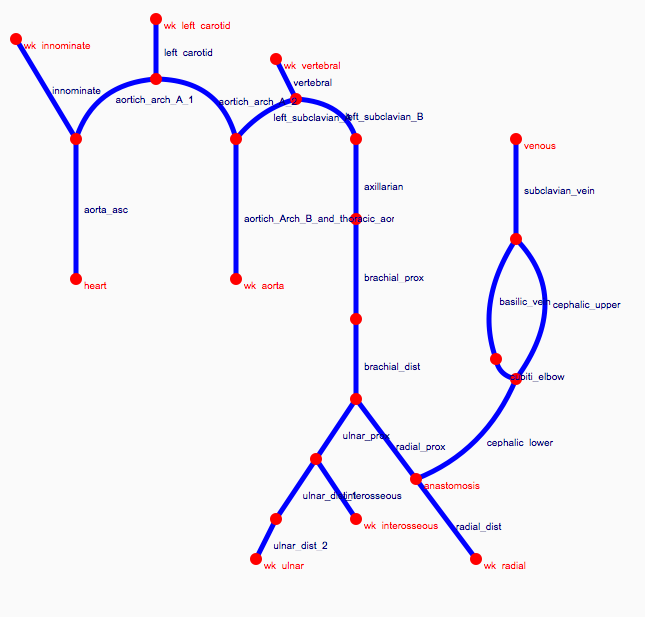 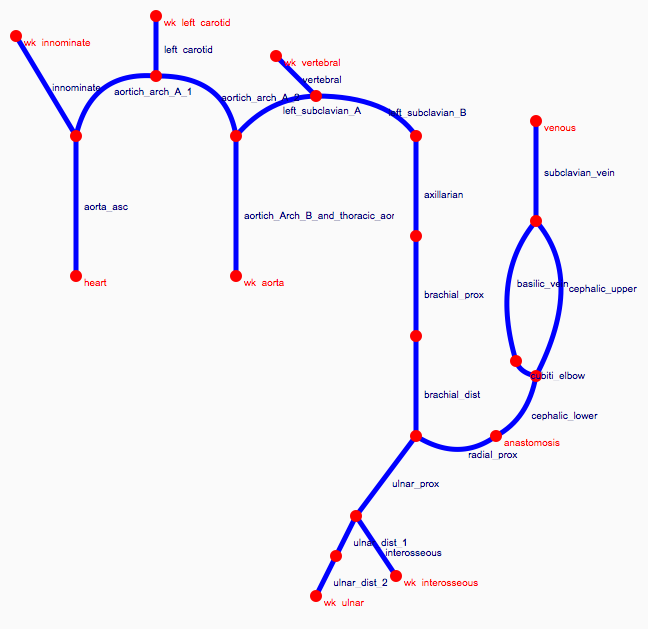 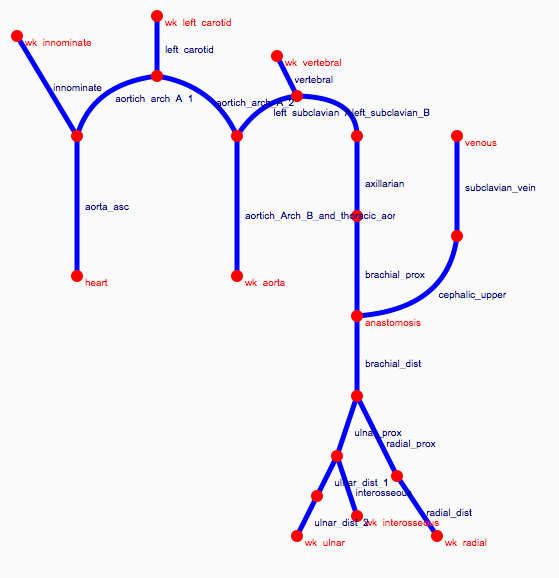 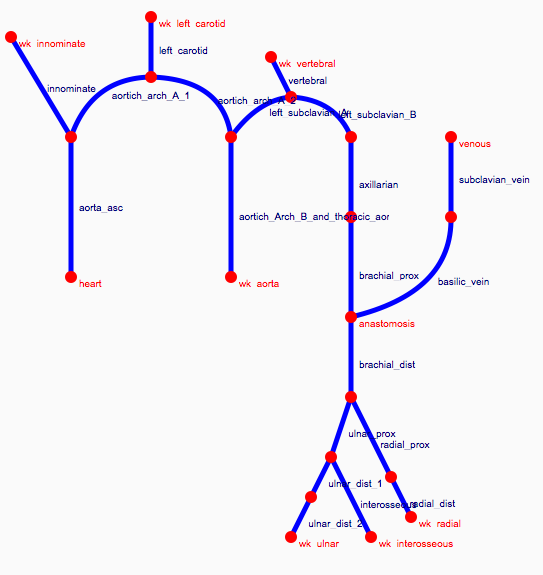 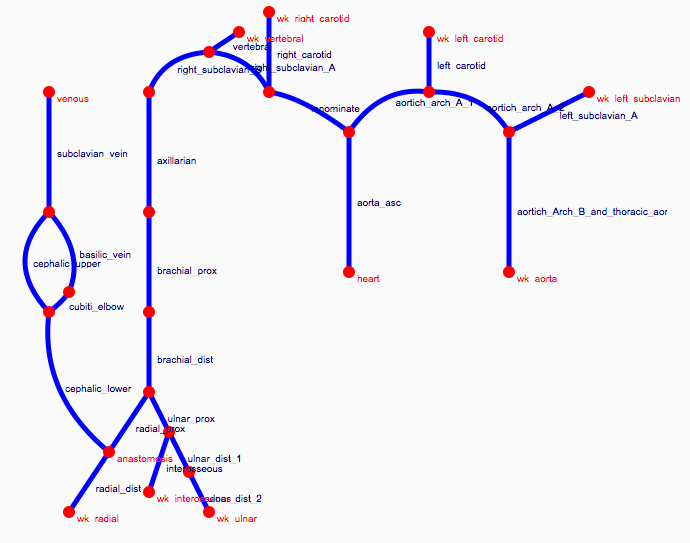 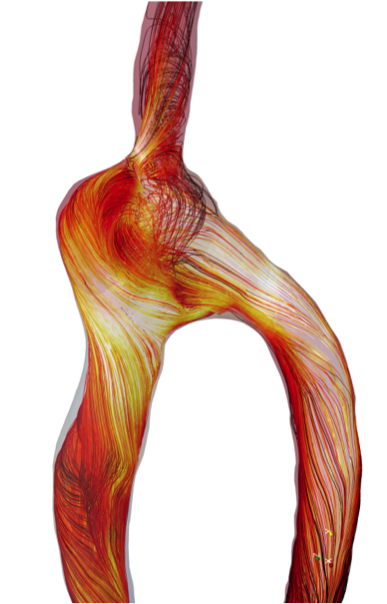 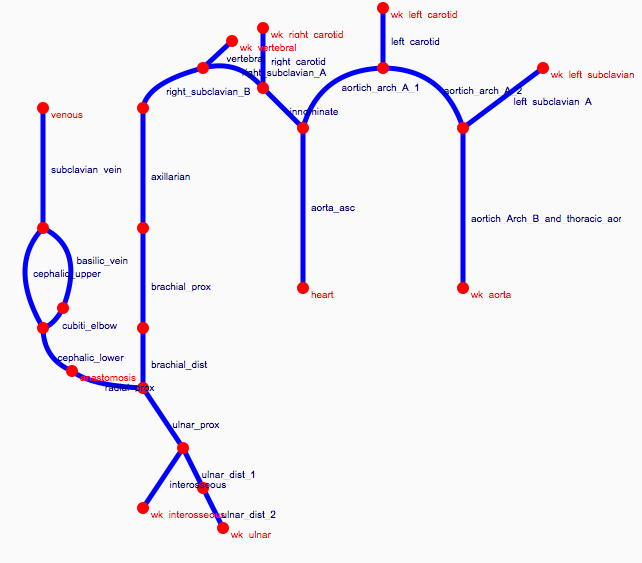 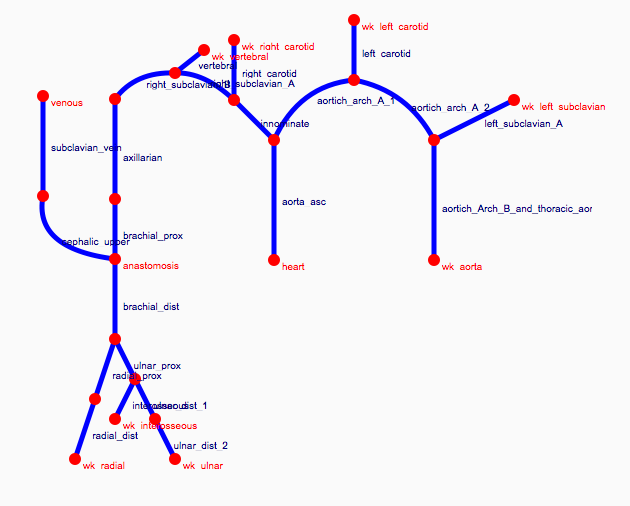 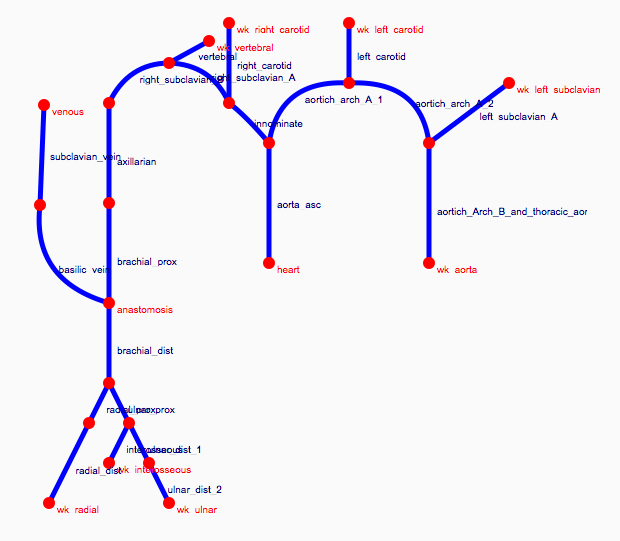 Generic models, defined as mean values of a population dataset (Merenda 2009) were therefore used as starting point, while replacing patient-specific information when available, eventually adjusting all other values with respect specific ones. The main limit of such strategy is that a generic model so built reflects the average adult and does not consider difference due to gender, age, body surface area (BSA). By simply replacing a specific value of a segment into the generic template, inconsistencies with neighboring values can be produced. In addition, even the rescaling of the entire network with respect to specific values may lead to wrong values, as a difference may be only local. In literature, there is evidence that arterial network size and properties depend on gender, age, BSA. These factors were usually investigated for a specific artery or a subpart of the arterial system deriving regression models.

The Circle of Willis 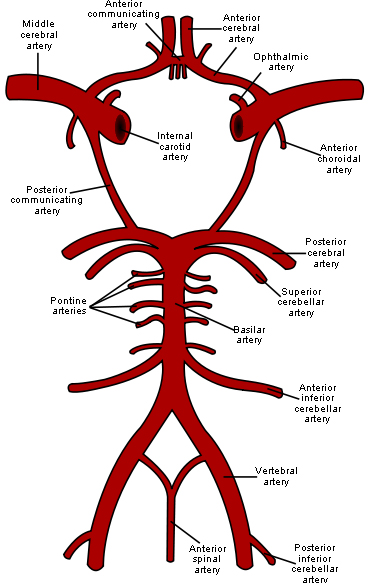 The circle of Willis (circulus arteriosus cerebri) is an anastomotic system of arteries that sits at the base of the brain. The “circle” was named after Thomas Willis by his student Richard Lower. Willis was the author of Cerebri Anatome, a book that described and depicted this vascular ring. Although such a vascular ring had been described earlier, the name Willis has been eponymously propagated.

The circle of Willis encircles the stalk of the pituitary gland and provides important communications between the blood supply of the forebrain and hindbrain (ie, between the internal carotid and vertebrobasilar systems following obliteration of primitive embryonic connections). A complete circle of Willis is present in most individuals, although a well-developed communication between each of its parts is identified in less than half of the population. 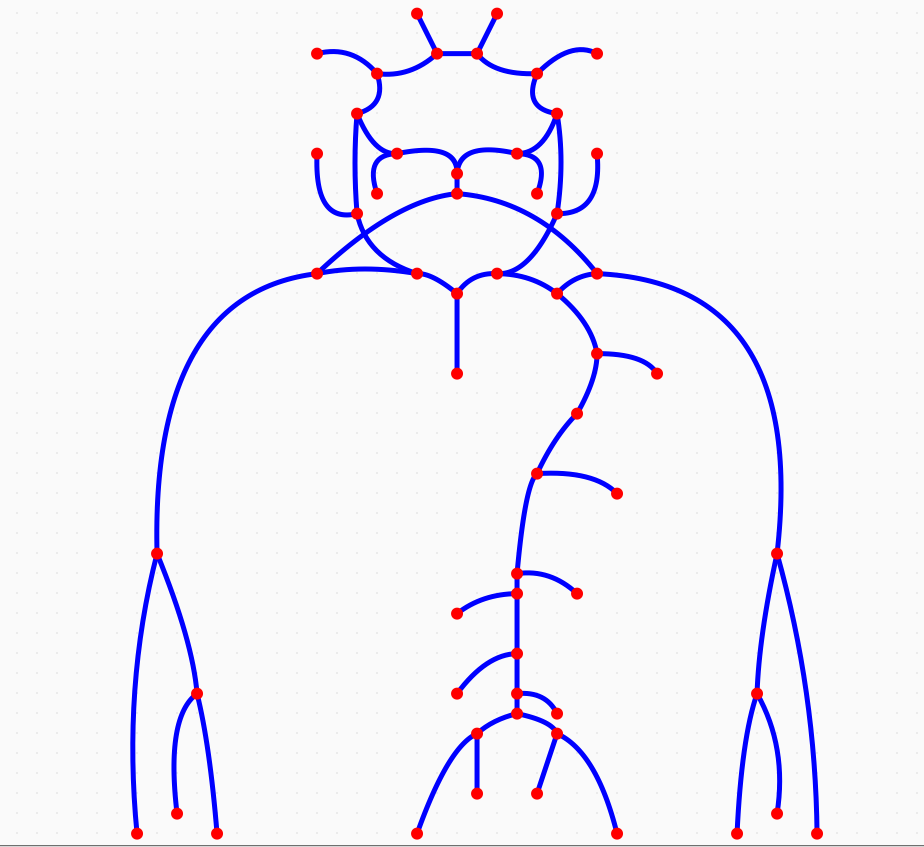 Network model geometry and data have been developed on the base of The influence of contrast agent injection on physiological flow in the circle of Willis, Mulder et al., Medical Engineering and Physics 2011.

The geometry is made by 60 arterial segments, which are defined by lenghts, proximal and distal radii, wall thickness and elastic modulus. All end segments are modelled using a Windkessel element.